If you like warmth, honesty and credibility in a performer, you'll love Charlie Landbsorough.
GERRY KELLY - ULSTER TV

Charlie's like good wine, he matures over a long period of time, when the cork was popped it was well worth the wait.
GERRY ANDERSON - BBC TV

The reaction to his show has been the biggest we have had.
JAMES BYRNE - REVELATION TV

The greatest response ever on the show.
PAT KENNY - KENNY LIVE RTE

What Colour is the Wind? ...in Charlie's case it's pure gold.
SCOTT REGAN

The following Christmas backting tracks are now available for purchase

Charlie's Interview with Gerry Kelly on the BBC Website

My Life and Music 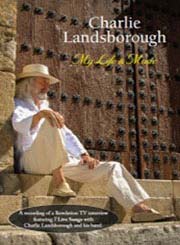 We have purchased the world copyright from Revelation TV the programme they produced with Charlie – My Life & Music. We have released this DVD under the LANA Records company (Charlie's own record label).

This features the late Doug Harris interviewing Charlie all about his life and his love for music. Charlie and his Band perform the following songs live on the programme. Further Down The Road, What Happened To Love, My Forever Friend, Medley (I Will Love You All My Life – What Colour Is The Wind), I Am Red and Shine Your Light (Stage Version).

We released it as a DVD to add to Charlie's collection, because we believe it fits in well with his Discography and would appeal to Charlie's Fans.

I have known Charlie from the beginning of his career and was one of the first to interview him. I had great pleasure in giving him the award on stage at Salisbury City Hall and inducting him into The British Country Music Hall Of Fame. He is alongside some of the many British Country Music greats who like Charlie have given so much talent to audiences all over the world, showing that Britain can produce top class singers, songwriters, and musicians.